CONGRATULATIONS TO THE JUBILEE!

Congratulations to the Jubilee!

Maior Pylypovych was born on August 30, 1923 in Zolotonosha, Cherkasy region.

After graduating in 1940, Dnipropetrovsk industrial college he became a student of the Faculty of Physics and Mathematics of the Dnipropetrovsk State University in the specialty "Mathematics". The training was carried out through evacuation to the city of Magnitogorsk (1941-1945), where MaiorPylypovych worked as a locksmith, a thread-grinder of the new-store shop of the Magnitogorsk Metallurgical Works, and from 1943 he was the driller of the blast furnace. Returning to his hometown, he continued his studies at universities, in 1950 he received a diploma with honors.

In the same year he entered the post-graduate course at the department of mathematical analysis of the DDU, which he graduated in advance in 1952, defending his Ph.D. thesis "Some questions of the theory of summation of multiple rows".

Immediately after defending a talented scientist was elected the head of the Department of Higher Mathematics of the Dnipropetrovsk Agricultural Institute (now DSAEU). In this position, M. Tiaman has consistently worked for over 60 years. From 1995 to 2000, he was also chairman of the Department of Economic Cybernetics.

Doctor's dissertation "Investigation of properties of functions with given best approximations" was defended in 1973 at the Leningrad State University.

Maor Pilipovich's research has been published in more than 130 papers and three monographs, among which the work "Approximation of the Proof of Periodic Functions" (2009) was awarded the first prize in the competition of the Academy of Sciences of Ukraine.

Also published 4 scientific and methodical guidelines, one of them, "Mathematical notions for engineers", took first place in the Dnipropetrovsk regional competition in 2010 for the best educational and educational literature.

During the years of professor M.Timan's management, 3 doctoral and 18 candidate's theses were defended by postgraduate students, lecturers and faculty members of the department, 16 of them M.Timan was a scientific supervisor.

M. Timan has dozens of distinctions and awards, the most important of them: the medal “For Labor Valor”, “For Merits” the ІІІ degree, Diploma of the Cabinet of Ministers of Ukraine, Medal “For Scientific Achievements”. He has honored titles “Honored Worker of National Education of Ukraine”, “Man of 2002” (ABI, 2002). Winner of the Yaroslav the Wise Award (AH VSHU, 2002) and St. Volodymyr (Academy of Science of Ukraine, 2008 p.). Awarded with memorable medals "M.V. Ostrogradsky 1801 -1861 "(Ukrainian Mathematical Congress, 2001), “For the high level of scientific results in the field of mathematical science” M. M. Bogolubov (II Mathematical Congress, 2009 p.).

Dnipro State Agraricultural and Economics University is proud of you as an internationally recognized scientist.

Colleagues, friends and graduates sincerely congratulate you on the 95th anniversary. We wish you good health and a cheerful mood. May your future life path be light and bright, and all the difficulties will remain in the past.

Faculty of Engineering and Technology 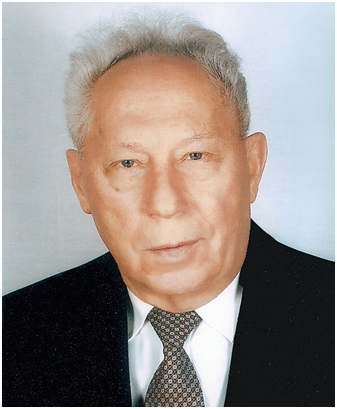